“Swap cheddar for edam and Snickers for Flakes and you could lose two stone in a year” screamed the Daily Mail article headline on 11 January 2012.

The claim comes from a study “by the team behind Men’s Health magazine”. As you will be able to see from the link, the article lists 21 items and suggests that you swap one for the other. Examples include:

– Have crunchy nut cornflakes instead of Special K honey clusters to save 54 calories;

– Have half a Tesco simply peperoni pizza instead of half a Tesco cheese feast deep crust pizza to save 40 calories;

– Have a Flake instead of a Snickers to save 161 calories. You’ve got the idea.

The 21 items add up to a saving of 2,205 calories. The article then says that – if you save these each week you could lose two stone in a year!

Here are a number of ways in which this is stupider than a very stupid thing!

1) One pound does not equal 3,500 calories. See here to save me duplicating the summary. Write to Men’s Health/The Daily Mail and demand evidence for this formula – can they succeed where seven UK public health and obesity organisations failed?

2) You will not lose 1lb for each deficit of 3,500 calories (and nor will you gain 1lb for each surplus of 3,500 calories). See here to save me duplicating the summary. The figure of an average of 11lb vs an expected 100+lbs has been confirmed in a few recent studies. This shows the sources of some of the 11lb examples. Hence you may lose a tenth of what you expect – in this case approximately 3-4lb – not 30-40lb!

3) Assuming that every deficit of calories is matched to the single calorie by the body giving up the equivalent in body fat is beyond absurd and yet it is assumed by this article and 99% of people working in the field of weight loss.

a) The body has to be in the biochemical state that it can break down body fat and this won’t happen if glucose is available in the bloodstream, or stored as glycogen, to use for fuel instead.

4) A calorie is not a calorie – as Jequier’s thermogenesis work showed (Eric Jequier, “Pathways to Obesity”, International Journal of Obesity, (2002).) Jequier found that the thermic effect of nutrients (thermogenesis) is approximately 6-8% for carbohydrate, 2-3% for fat and 25-30% for protein. Hence any 100 calories eaten is no longer 100 calories the minute it enters the body. Men’s Health would need to adjust for every macro nutrient for every food compared and even then points 1, 2, 3 and 5 here render the whole study nonsense.

5) Some calories have a job to do. Fat and protein calories to be precise. Let us say our average man needs 2,605 calories a day (as the government has decided), if he exercises 1-3 times a week, the Harris Benedict Equation tells us that approximately three quarters of these calories will be for basal metabolic needs (the BMR) and a quarter for energy/activity over and above this. The BMR needs fat and protein. Hence approximately 1,900 calories are needed for the BMR and approximately 700 on top of that for other activity for the day. This means that Mr Average needs to eat 1,900 calories in the form of (quality) fat and protein and 700 in the form of carbohydrate (or fat – fat can equally be used for energy – protein can too, but it’s less efficient).

So, back to Men’s Health, if our person eats 8.8 Snickers, at 296 calories each this will deliver the 2,605 daily calorie intake. If Mr Average eats 8.8 Flakes instead – they have ‘saved’ 1,416 calories and Men’s Health assumes that this will deliver a weight loss of 1lb for every time two and a half times that this 1,416 saving is made (3,500 calories). This is nonsense. Mr Average only needed 700 carb calories (he actually needed zero, as he could have fueled on fat, so I’m being generous). Empty junk confectionery calories can do nothing to build bone density, fight infection, repair cells (BMR) etc. Hence, eating Snickers, Mr Average consumed 1,900 effectively useless calories, which can only be stored as fat and thereby make him fat. With the Flakes, Mr Average still consumes more carbs than he needs and still gets fat. Mr Average also gets sick by the way –  with either option – Men’s HEALTH!

The final point to make is that virtually every food on this “Eat this, Not that” list is complete junk – the tuna in water is the only decent product out of 42 products. Tuna doesn’t come naturally in vegetable oil! Men who care about their health shouldn’t even get lamb from Tesco – they should get grass grazed quality lamb from their local butcher. Pizza, processed ham, oven chips, confectionery, Quavers, Discos, Mr Kipling rubbish, Magnums, Vienettas have no place whatsoever in a health diet – for men or women.

If you want to lose weight – eat real food and nothing but real food – meat, fish, eggs, veg, salad, dairy products should be the staples and then nuts, seeds and fruits in season in moderation. Grains – ‘whole’ or otherwise – are just glucose with a few or very few vitamins and minerals. Animal foods will always beat a starchy carb in any nutrition contest.

The BDA attacks diets, but what about theirs? 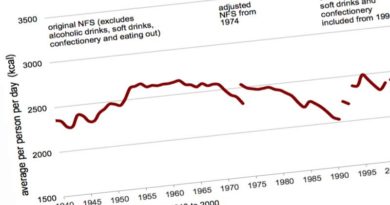 Where does the 3500 calorie theory come from?

9 thoughts on “Men’s Health and Eat this, Not that – bad science at its worst!”