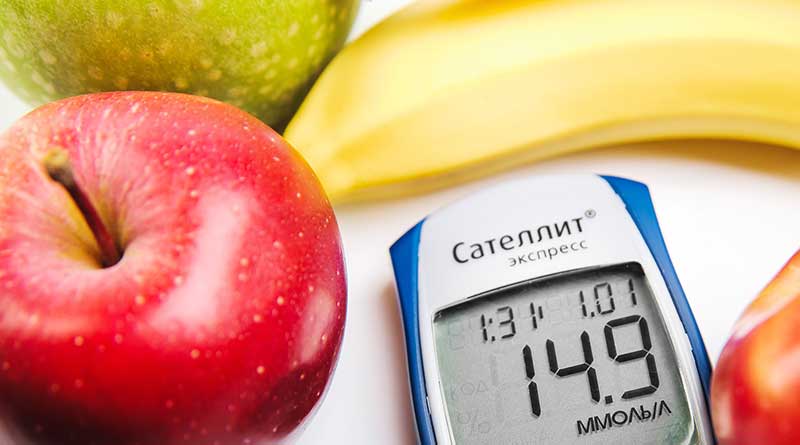 * Andy and I wore one each for two weeks and our shared observations were:

- Fruit, other than berries, spikes blood glucose levels outside the normal range.

- Exercise can ‘mop up’ some of the glucose put into the blood stream after a meal (but far better not to put it in in the first place).

- If alcohol is drunk in the evening, blood glucose levels can dip below normal during the night.

- Caffeine made no difference to either of us, but that doesn’t mean that it will have no blood glucose impact for you.

- Eating very low carb throughout a 24-hour period can keep someone in the normal blood glucose range for the whole day. Hunger is not felt when this happens. Stable blood glucose is the dieter’s friend.

- The low-fat high-carb dietary guidelines are a recipe for developing type 2 diabetes.

The sooner every person has the opportunity to wear a Continuous Glucose Monitor (CGM), even for a fortnight, the better. They will see which foods raise their blood glucose and then learn to avoid them and further growth in type 2 diabetes could be avoided.
Please login to view this content

World Diabetes Day is this Thursday, 14th November. This second note focusing on diabetes is more personal. My first experience of diabetes, as some of you may know, was when my older brother, Adrian, was diagnosed with Type 1 when he was 15. We were summoned to hospital as a family to be trained in spotting the difference between hypoglycaemic (low blood glucose) and hyperglycaemic (high blood glucose) events. The family diet changed overnight. My parents had been brought up on the Sunday roast and high tea of mining families. White bread sandwiches, scones and jam and cakes at 4pm were no longer part of our lives. The advice that Adrian was given when diagnosed was far better than the advice that he was subsequently given over time. Initially, there was very much a view that meat and two veg was good and starchy stuff was bad. Sadly, the ‘fat is bad/base your meals on starchy foods’ advice became more strident over the years and Adrian followed that for far longer than he should have done. Adrian would come to stay, and he would be the one having oat biscuits with cheese when Andy and I just had cheese.

All this changed when Adrian was one of the early recipients of a Continuous Glucose Monitor. Within days he was phoning me astonished that he could see for himself what I had been saying for some time – eggs would be better than porridge for breakfast, cheese is better than bread for lunch and you don’t need any starchy carbs at dinner – fill your plate with meat/fish/eggs and/or cheese and vegetables (ideally non-starchy). His life and diet changed in a couple of weeks. He was able to reduce his insulin. He found his blood glucose not only to be lower but more stable. As he reduced insulin, he became less worried about the overnight hypo (which is probably the greatest fear of type 1s). He’s not obsessive about very low carb – he’ll have a set menu in a special restaurant and not worry about it – but he’s routinely substantially lower in carbohydrate than he has been for life.

During the summer of 2018, Andy and I each had the opportunity to try a Continuous Glucose Monitor (CGM) for two weeks. We are not diabetic, but we did it for interest. We made a number of observations. In no particular order they were:

My CGM observations led me to tweet on World Diabetes Day 2018 (Ref 1): 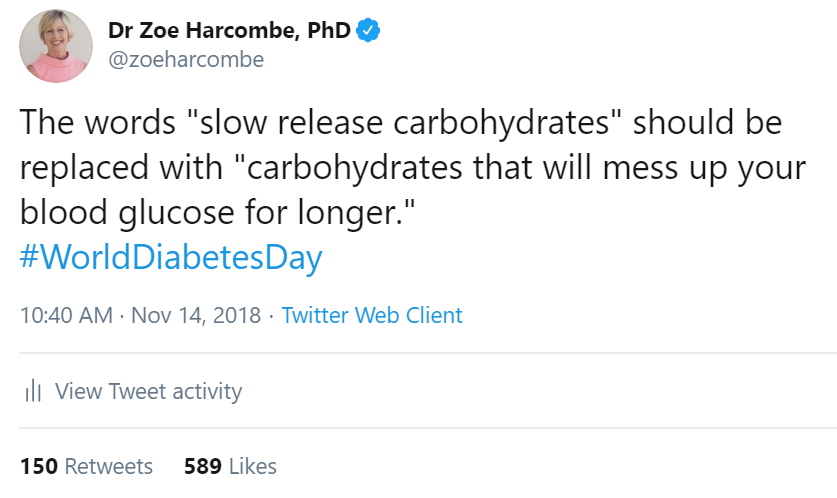 See the graph below when I had a bowl of porridge for lunch to test the impact of slow release carbohydrates. It looks like Table Mountain! Not only did my blood glucose (BG) rise quickly to a high of 13.4, it stayed high between 13.00 and 16.30. (The gray scale in all the charts is the normal BG range – I’ve truncated the daily graphs to focus on the precise example being used). 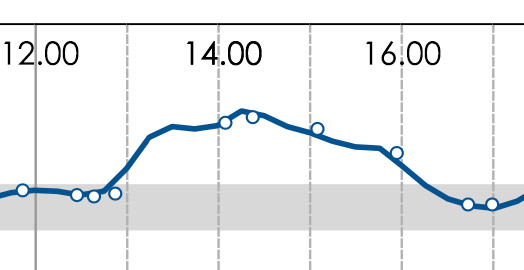 NICE, gastric bands and yet more conflicts of interest