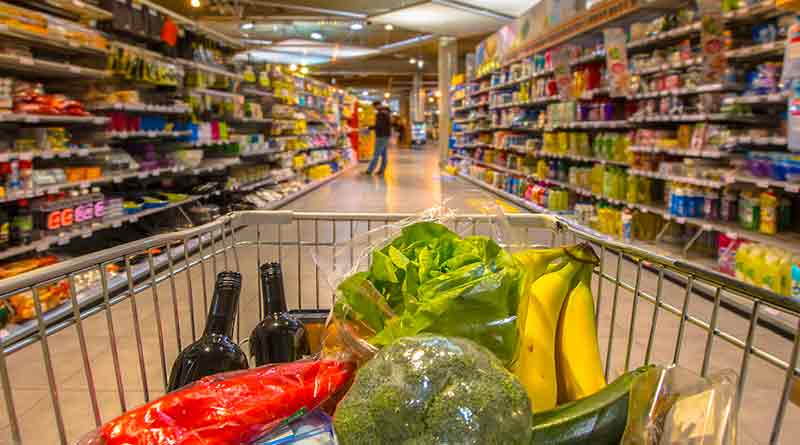 A comprehensive survey detailing what UK people eat has been available since 1940. It was called the National Food Survey from 1940 until 2000 and has been called the Family Food Survey since 2002.

The most recent Family Food Survey was published in December 2015 for 2014 data. It can be seen here. The next issue is due out in March 2017, so this is the most recent data available (at the time of this post).

In the “Family Food 2014” document, Table 3.3 is the main summary table for intakes by food category. The breakdown by energy intake is as follows:

* Calorie intake looks low. The October 2011 Public Health England ‘obesity strategy’ actually increased recommended calorie intake per day from 2,550 to 2,605 for men and from 1,940 to 2,079 for women.  The average of 1,917, covering men and women, suggests under-reporting.

* Red meat (see here and here) is invariably lumped in with processed meat in studies that try to demonise all meat intake together. The average UK person consumes four times as much processed meat and meat products (that will include pies/pasties/sausage rolls and other carb enclosed stuff) as carcase meat. We record these intakes separately and academic studies are able to analyse them separately. They rarely do so.

* One of the reasons I don’t attack soft drinks alone is this 2% figure. The main dietary culprit is sugar – nutritionally void and omnipresent. Sugar is in every fake food above with the exception of fats and oils. Sugar is thus in rows totaling 1,336 calories – just under 70% of UK calorie intake. Without sugar (and/or artificial sweeteners) there would be no: confectionery; soft drinks; cakes; buns; pastries; biscuits; processed fruit; sugar and preserves. Without sugar the following rows would also be decimated: cereal; bread; meat products (pies etc) and other food products (Ref 1) in the UK diet.

If we could cut sugar alone from the human diet it is difficult to see how obesity could prevail – or much of the chronic illness now suffered by so many people: diabetes; cancer; cardiovascular disease and so on.

Check table 3.8 in the Family Food Survey 2014 to see average nutrient intake – for the fat soluble vitamins especially: 489μg retinol (don’t assume that carotene can be converted); 3.08μg vitamin D and 12.09mg vitamin E. The US recommended intake of vitamin D is 15μg daily. Even with the UK (Ref 2) guideline of 10μg, the average UK intake is not even one third of this. In October 2013, the Chief Medical Officer for England said that the country should be “profoundly ashamed” that rickets had returned to the UK. Government dietary advice, demonising as it does real food and natural fats, has achieved this. That’s what Dame Sally Davies should be profoundly ashamed of.

* Table 2.1 on Page 10 of the document tells us that the average Brit consumed 40g of butter per week – that’s less than 6g a day – that’s probably the amount left on the knife after buttering something! And public health advisors think that butter makes us fat. Ha ha! Contrast this with the 806 calories per day of the starchy foods that the government tells us to eat (rows 9, 12, 15, 16, 17, 18 and 19).

* The same Chief Medical Officer recently lamented that “obesity has become the norm.” Look no further than what we’re eating and what you’re telling us to eat.

p.s. “Rob” asked for info on how our diet has changed, during the period of escalating obesity. This is an extract from my 2010 book “The Obesity Epidemic: What caused it? How can we stop it?” The period 1974 – 2000 covers the introduction of the dietary guidelines up to the point the National Food Survey data stopped. It also covers the period during which UK obesity rose from 2.7% for men and women (1972) to 22.6% for men and 25.8% for women (1999). 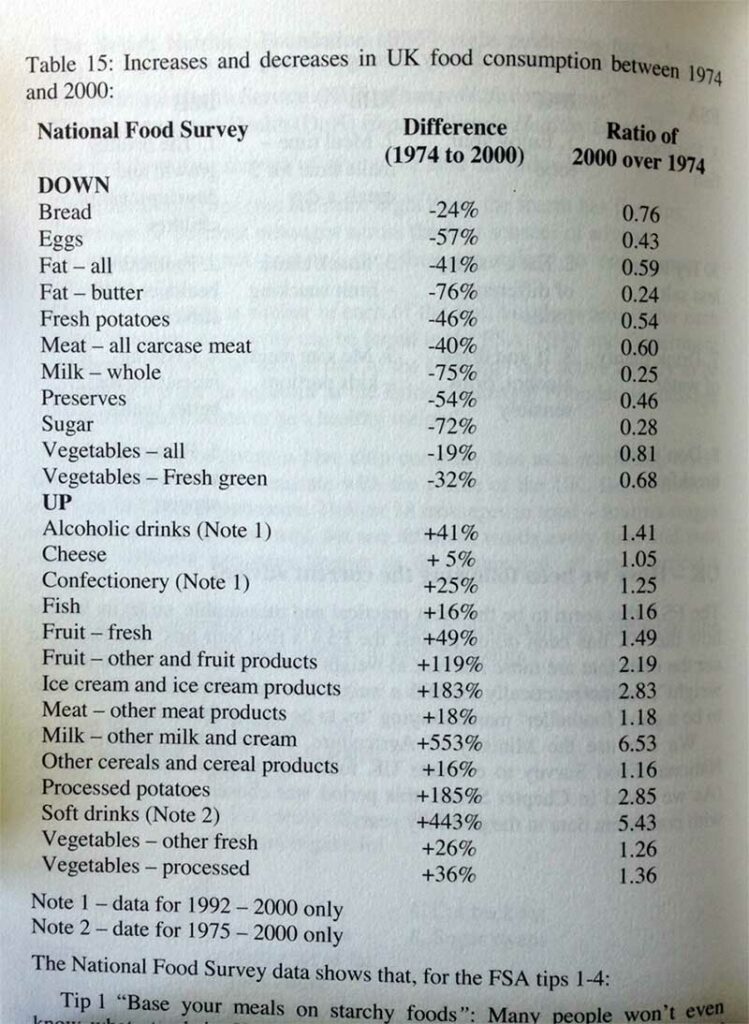 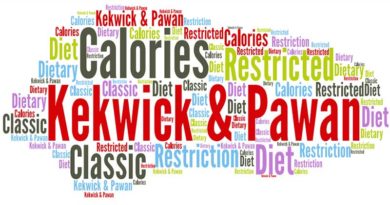 Kekwick & Pawan: is a calorie a calorie?