I am struggling to think of a diet & health story, which has been reported worse than the one dominating the press this week – and there tends to be at least one in the press every day. The newspapers seem to think that “artery-clogging” is an adjective to precede either, or both, of the words “cholesterol” and “fat” – whereas “life-vital” would be more appropriate words.

The story on red meat and cancer has to take the biscuit, however…

The story started to break on 20 February 2011 – we were forewarned that a report from the Scientific Advisory Committee on Nutrition (SACN) was about to be released. “Red meat does increase cancer risk, new report will confirm” screamed the Daily Mail headline. The article opened with the following three sentences:

“Britons should cut their consumption of red and processed meat to reduce the risk of bowel cancer, scientific experts are expected to recommend in a report.”

“The Scientific Advisory Committee on Nutrition (SACN) was asked by the Department of Health to review dietary advice on meat consumption as a source of iron.”

“In a draft report published in June 2009 the committee of independent experts said lower consumption of red and processed meat would probably reduce the risk of colorectal cancer.”

So, SACN was asked to look at meat consumption as a source of iron and are going to conclude instead that lower consumption of red and processed meat would probably reduce the risk of colorectal cancer (bowel cancer)? (All the emphases are mine).

Notice how red meat has become red and processed meat – could these two substances possibly be more different? Real meat (by weight) is the most nutritious food on the planet – offal is best, red meat next best and white meat the next best for essential fats, essential proteins (amino acids), vitamins and minerals. Processed meat should not be ingested by a human being – full stop. Putting these two together is like putting drinking water and coca-cola together or sardines and sugared, breaded fish sticks. This is irresponsible and ignorant in the extreme.

Then notice the word probably – despite the fact that SACN were asked to look at meat and iron – we expect them to recommend that lower consumption will probably … No one reads that caveat – the damage is done in the sensational headline screaming out from every newspaper and on line news tweet on the 20 February.

The London Evening Standard was one of the first to run the story: “Eat less meat: Government experts warn Britons.”  Experts from the SACN are expected to tell consumers to eat no more than 70g of “red or processed meat” a day. The headline says meat; the first sentence adds “or processed” in straight away. Is that because processed meat is the real killer? Does the sentence not hold if we just talk about meat?

The article goes on: “Some 1,900 cases of bowel cancer could also be prevented through cutting red meat consumption to under 70g per week.” Hang on a minute – how so?! The very next sentence describes the process by which processed meat is chemically altered. The sentence after says: “It is thought this process causes the formation of carcinogens, which can damage cells in the body and allow cancer to develop.” I have little doubt that processing meat causes carcinogens which can damage cells etc. But Ermentrude, out in the field near my house, grazing on fast growing grass in the Welsh rain and occasional sun – surely Mother Nature didn’t put her there to kill me?

“Last year, experts from the Harvard School of Public Health in the US found that eating processed meats can increase the risk of heart disease and diabetes… However, unprocessed red meats, such as beef, pork or lamb, do not raise the risk, the study found.” So there is a difference between real meat and processed meat – we’ll just leave it to the end to point it out. This is disgraceful reporting.

BBC weren’t content just with TV coverage. They ran a story and tweeted on it in the morning – no doubt as a matter of urgency – I guess we need to know before we choose our lunch? “Eat less red meat to reduce cancer risk” the story instructed. First sentence? You guessed it: “People should cut back on red and processed meat to reduce their risk of getting cancer, the government says.”

Then the Department of Health tweet arrived: “Red meat link to bowel cancer.” Followed by the, now very familiar: “It  (SACN) concludes that red and processed meat probably increases the risk of bowel cancer…”

At this point it is important to go to the original source and see what SACN actually said. I haven’t read all 374 pages – I usually start any report with the conflict of interest and then look at the summary. If anything in the summary is not clear – you can always delve deeper.

The conflict of interest is always interesting. In this case we have the chairman, Professor Peter Aggett with the SACN 2008 annual report declared interests as: Astra-Zeneca; Nestec; ILSI (I cover this ‘sugar protecting’ body in my book “The Obesity Epidemic“), Wellcome; Yakult and Cadbury Schweppes. The vice chair, Dr Ann Prentice, has declared interests as: Institute of Brewing & Distilling; Mars; National Association of British & Irish Millers; Optimal performance limited; Tanita; Coca-Cola; The Beverage Institute for health and wellness (yes, really) and Weight Watchers. Professor Sue Fairweather-Tait has declared interests in Coca-Cola, GlaxoSmithKline, British Egg Information Service, Unilever and Totus Medica. Those are the worst.

The headlines of the report are then:

– In a 1998 Department of Health report, the COMA (Committee on Medical Aspects of Food & Nutrition Policy – the predecessor for SACN)  “highlighted possible links between red and processed meat and colorectal cancer”. Since red meat is an important source of iron in the human diet, SACN were asked to look at “the possible associated adverse implications of a reduction in meat consumption on other aspects of health, particularly iron consumption.” That was the brief – the possible link between processed meat and bowel cancer had been mentioned 13 years ago.

– The Terms of Reference were (and I quote) “To review the dietary intakes of iron in its various forms and the impact of different dietary patterns on the nutritional and health status of the population and to make proposals.” Hence calling the report “Iron and Health” – ‘cos that’s what it’s about.

– SACN started off the report with a bunch of excuses for why it has taken 13 years to write a report, which is so critical that the BBC needs to tell us (the wrong headline) about it twice before lunch.

– The conclusion of their task was as follows: “The modelling exercise indicates that reducing total red meat consumption (*) of consumers in the upper range of the distribution of intakes, down to 70g/day, would have little effect on the proportion of adults with iron intakes below the LRNI” (Lower Recommended National Intake).

Paragraph 36 reiterates that there is merely a possibility of a link between red and processed meat and bowel cancer. The logic then goes:

– “red and processed meat is a source of iron”

So, we’re not worried about population iron intake if the high red and processed meat consumers cut back.

And that’s what the SACN report was about.

But, never let the science get in the way of a good story…

Red meat is going to kill you! 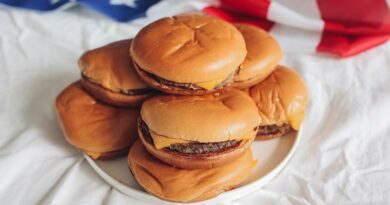 What do Americans eat?