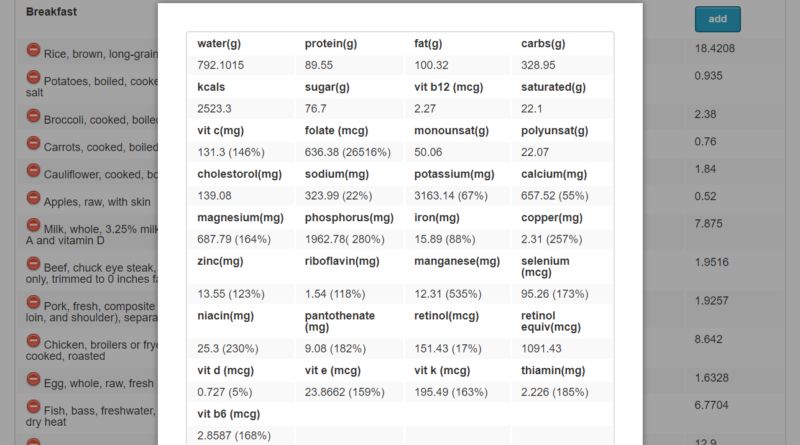 A couple of hours after seeing the report, I published this post.

On 26th January, I submitted the following letter to The Lancet:

This correspondence is in response to “Food in the Anthropocene” (Ref 1).

Table 1 in that document set out a “healthy reference diet” based on 2,500 calories. I analyzed the micronutrients provided by the recommended diet.

Notwithstanding that an adult female would consume four fifths of the diet (and nutrients); the diet was already nutritionally deficient. The most serious deficiencies were:

Iron – the paltry amounts of beef, pork, chicken and fish provided a maximum of 1.1mg of heme iron. “The RDAs for vegetarians are 1.8 times higher than for people who eat meat” (Ref 5). Barely half the iron intake for females would thus be provided.

Essential fatty acids – 28g of fish cannot provide the EPA and DHA required, while the nutritionally poor 350 calories of highly unsaturated fats would create an unhealthy omega-6 to omega-3 ratio.

Vitamin B12 requirements were almost met, but Table 1 allowed for animal foods to be replaced with plants and these would not provide B12. There is an error on p16: “The only exception is vitamin B12 that is low in animal-based diets.” That should be plant-based diets.

I also found issues with vitamin K (dominated by K1, not the better absorbed K2); potassium and sodium (the latter two being more easily rectifiable).

The precise numbers would change with different foods chosen, but the scale of the deficiencies would not.

This diet will cause malnutrition and is dangerous to recommend.

Thank you for submitting your Letter to The Lancet. Having discussed your Letter with the Editor, and weighing it up against other submissions we have under consideration, I am sorry to say that we are unable to accept it for publication. Please be assured that your Letter has been carefully read and discussed by the Editors. Thank you for your interest in The Lancet, I hope this decision does not deter you from considering us again in the future.

ZH – Clearly The Lancet does not want my letter alongside the original article, so that anyone viewing the original article would be mindful of the fact that the diet being recommended is nutritionally deficient.  It will be interesting to see which letters, if any, are published, as I know of other critiques that were submitted. The error on p16 has at least been corrected to read “The only exception is vitamin B12 that is low in plant-based diets.”

“Heart deaths have halved” – but what does this mean?

Exercise: Is a lot more a lot better?

4 thoughts on “Letter to the Lancet re. EAT”