In a study of formerly obese people, researchers at the University of Florida found that virtually all said that they would rather be blind, deaf or have a leg amputated than be obese again.[1] That is the extent of our desire to be slim and yet two thirds of people in the UK, USA and Australia are overweight and one quarter obese. Why?

To be slim, to achieve the thing we want more than our sight, hearing, or mobility, we are told that we just need to “eat less and/or do more.” Quite specifically, the advice is “One pound of fat contains 3,500 calories, so to lose 1lb a week you need a deficit of 500 calories a day.”[2]

So, why don’t we just follow the advice? Why on earth do we have an obesity problem, let alone an epidemic, when we so desperately want to be slim?

I set out to answer that question in the late 1980’s and this book is the culmination of that quest. At the time of starting my research, obesity levels for men and women in the UK had reached double figures. The World Health Organisation published BMI statistics for the UK for five comparator years: 1966; 1972; 1982; 1989 and 1999 (presented in the tables below).[3] The UK health service was devolved in 1999, with England, Scotland, Wales and Northern Ireland managed separately from this point forth, thus losing the opportunity for UK data beyond the turn of the Millennium.

Table 1: Percentage of men in each BMI category (UK):

Table 2: Percentage of women in each BMI category (UK):

We can make a number of observations about this data, but there is only one key point to note. UK obesity levels were remarkably constant and small for decades. Indeed, throughout the tens of thousands of years before the 1966 data, there is no record of an obesity problem, let alone an epidemic. Suddenly, in evolutionary terms, and dramatically, in amounts, obesity levels increased from 2-3% in the 1970’s to 25% today. Two thirds of UK citizens are now overweight or obese.

The USA started from a slightly higher base and displayed a virtually identical trend, with 70% of Americans currently overweight or obese: 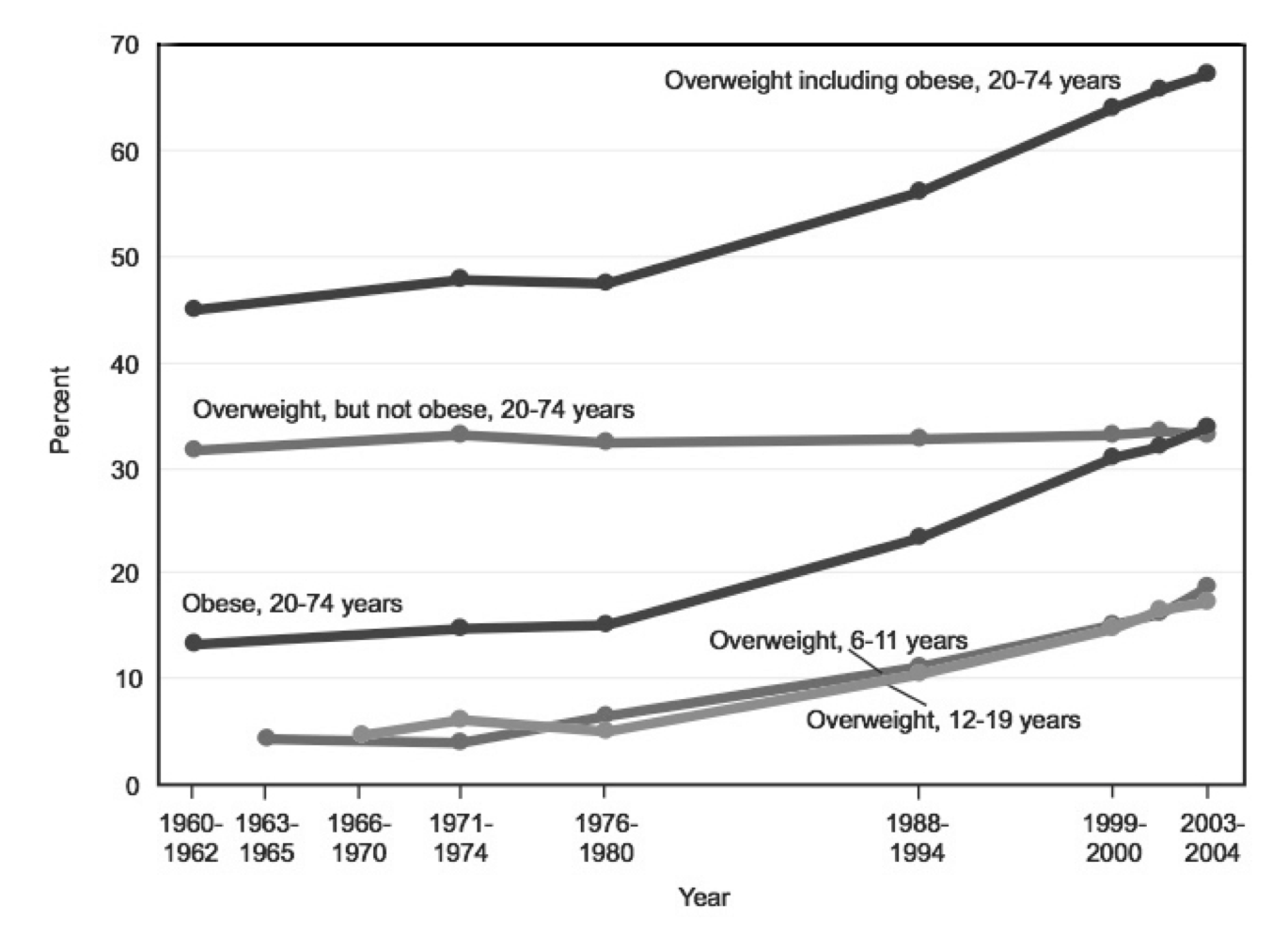 It seems so obvious that the starting point for understanding the obesity epidemic should be – what changed in the late 1970’s/early 1980’s? Was there one thing that happened that could explain the sudden and dramatic increase in obesity?

Yes there was. In 1977 the USA changed its public health diet advice. In 1983 the UK followed suit. A more accurate description would be that we did a complete U-turn in our diet advice from “Farinaceous and vegetable foods are fattening, and saccharine matters are especially so”[5] to “base your meals on starchy foods”. Obesity has increased up to ten fold since – coincidence or cause?

There are so many more questions that we need to ask (and answer) to understand the worst health crisis that we have ever faced:

2) Are you familiar with the formula “one pound equals 3,500 calories, so to lose one pound of fat, you need to create a deficit of 3,500 calories”? When and where did this originate? Would you be able to prove that the formula holds true? Would you be interested to know the responses given by seven UK government and obesity organisations when asked those same questions?

3) Is a calorie a calorie? Is one sugar the same as any other?

4) What happens if we manage to get humans to eat less and/or do more over a period of six months? What happens afterwards? What is the scientific evidence for sustained weight loss in the seminal obesity studies from the past 100 years?

5) Are obese people greedy, or lazy, or both, or none of these? Can obesity be caused by anything other than greed or sloth?

6) Where does five-a-day come from? What are the five most nutritious foods on the planet?

7) Why is fructose being called the lipogenic (fattening) carbohydrate?

8) Would you be able to prove that saturated fat consumption causes heart disease? If I told you that the study to consider this has not even been done, would you believe me? If the UK Food Standards Agency

9) What remains if you take the public health list of ‘saturated fat’ and cross out processed food (primarily carbohydrates)? Would you be open to the idea that we could have a heated agreement with a clarification of terminology?

10) Where does cholesterol fit in to the obesity debate?

11) What is human fat tissue? How do we (biochemically) store fat? How do we burn fat? Which macronutrient determines fat storage and fat utilisation?

12) Does sedentary behaviour explain the timing and the increase in obesity? Can exercise be a cure for the obesity epidemic?

13) How embedded are the food and drink industry in our dietary advice and agencies? Would you be concerned if the likes of Coca-Cola, Kellogg’s and the sugar industry were working in partnership with our national dietary associations?

This epidemic has become far too serious for us to continue with tautologies (a calorie is a calorie), or platitudes (eat less/do more), or marketing slogans (five-a-day). It is time for some facts.

I will keep everything as simple as possible, but, as Albert Einstein so rightly advised “It can scarcely be denied that the supreme goal of all theory is to make the irreducible basic elements as simple and as few as possible without having to surrender the adequate representation of a single datum of experience.”[6] I.e. make things as simple as possible, but not simpler. We have made some serious simplifications thus far and we must make no more.

This book will examine some of the classic literature in some detail: The Seven Countries Study; the Minnesota Starvation experiment; Newburgh and Johnston; Kekwick and Pawan; Stunkard and McLaren-Hume; systematic reviews of the efficacy of different weight loss methods and other evidence relied upon by our public health advisors today. Some studies have shaped our current advice and shouldn’t have and some have been overlooked and shouldn’t have been. We need to know what stands up to scrutiny, what can explain the obesity epidemic and what, therefore, can stop it. This book is fully referenced and evidence based. If I proffer an opinion, I make it clear that I am doing so by saying “I believe” or “I think”. I invite you to come to your own conclusions along the way.

This book will take you on the journey that I have been through, as an obesity researcher, from thermodynamics and peanuts under Bunsen burners to obesity organisations sponsored by food manufacturers and carbohydrates being confused with fats. Out of an illogical assumption that people have made themselves obese (when this is the last thing that they want to be), through being greedy and lazy, may come a different logical conclusion that our current diet advice a) doesn’t work and b) worse – that it is actually the cause of the obesity epidemic that it is supposed to cure.

The final part of this book looks at what needs to happen to reverse the obesity epidemic. This can be achieved, but crises require major interventions, not the same things done in different ways. One definition of madness is doing the same thing again and again and expecting a different result. Revolutionary change will not be achieved with the UK Change4Life campaign, for example, advising people to have a banana instead of a bag of crisps. Swapping one starch for another is going to make no difference to the obesity epidemic. Some of the proposals may appear extreme, but, if they do, how does “90% of today’s children being overweight or obese by 2050” sound?[7]

There is so much conflicting information about diet and nutrition, and the public is rightly confused and mistrustful of current advice. The same conflict can arise for a researcher, so I have established two fundamental principles, to which I return for grounding every time I find myself questioning issues.

1) I believe that nature knows how to feed humans better than food manufacturers. Nature has no vested interest, no profit to be made from us and no reason to provide us with anything other than nutritious food. I therefore believe that the human race must return to eating food in the form closest to that provided by nature: meat, eggs and dairy from naturally reared animals; fish; vegetables and salads; nuts and seeds; fruits and whole grains. I call this real food.

I have a one in four chance that you, the reader, are obese. I have a two in three chance that you are overweight. Given your interest in the subject matter, I have a virtual certainty that you know and/or work with overweight people. If I can prove to you that eat less/do more has never worked and will never work – are you prepared to consider an alternative that will? For yourself or for your patients or for our children facing a fat future?

All I ask is that you read this book with the most open mind possible. My experience of calories started at the age of 15 and I believe nothing now that I believed then. When I started studying nutrition professionally, I was a vegetarian. Within weeks of learning about food and nutrients, I started eating fish. When I started the manuscript for this book I was still a non-meat eater, believing that I could be optimally healthy without meat and that animals could concomitantly be better for this. After 20 years of abstinence, I now eat red meat until, or should I say when, the cows come home. That is how much my own thinking has changed as a result of the research I have undertaken. Please be open minded to your own views changing even a fraction of this, rather than have the following apply to you:

“My mind is made up; don’t confuse me with the facts.” (Anon)

The rest of this book is available to site members only.
To continue reading, please login or purchase a membership. Thank you.