One of the most commonly held diet myths is "To lose one pound of fat you need to create a deficit of 3,500 calories". This is wrong at every level. First of all, one pound does not equal 3,500 calories, as we will show below. You will see this formula in government literature, in just about every diet book, in private health booklets and all over the internet. The next time you see it, or hear it, ask where it comes from. You will not get an answer. (I asked the following seven UK organisations: the National Health Service (NHS); the National Institute for Clinical Excellence (NICE); the Department of Health; the National Obesity Forum; the Association for the Study of Obesity; the British Dietetic Association and Dieticians in Obesity Management and five of these have no idea where it even comes from. The two that tried to prove it failed by a factor of about ten.) (I’ve since put this up as a full blog post).

The first part of the calorie formula is the assertion that one pound of fat contains 3,500 calories. You will struggle to find anyone who can demonstrate the precise calculation behind this, so I'll offer this as a suggestion:

2) Fat has nine calories per gram (this is the universally accepted conversion, but it is an estimate and significantly rounded down from even the original estimate);

3) Human fat tissue is approximately 87% lipid (this is a widely accepted conversion, but it is also an estimate).

3,555 is close enough to 3,500 you may think, until you see the absurdity of how precisely the formula is applied. The National Obesity Forum web site states "one less (sic) 50 calorie plain biscuit per day could help you lose 5lbs (2.3kg) in a year - and one extra biscuit means you could gain that in a year!" (Ref 1) No it won't. I can't even get an estimate of the formula to closer than 55 calories 'out'.

With little effort I can find evidence in obesity journals that fat has anywhere between 8.7 (Ref 2) and 9.5 (Ref 3) calories per gram. The same  obesity journal that says that human fat tissue can be 87% lipid also says that it may be 72% lipid (Ref 4).

Taking the extremes of these, we can establish a range whereby one pound of fat could contain anywhere between 2,843 and 3,752 calories. Given that it is currently held that one pound is 3,500 calories we could (according to this formula) inadvertently gain six stone every year at the low end of the calculation and lose almost two stone in the same year if one pound is 3,752 calories. The 3,750 calories is the assumption held in this classic article (Ref 3). Don't worry about any of this - because the formula doesn't hold at any other level either. (Please see footnote for calculation). 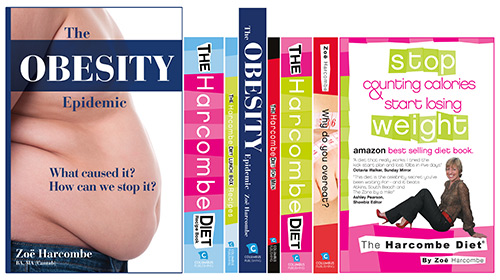 All books are available as paperbacks and eBooks. Full details here

Energy in does not equal energy out
Eating less will not make us weigh less
Weight gain is about fat stored, not calories
1lb does not equal 3,500 calories
You will not lose 1lb every time you create a deficit of 3,500 calories
We have got cholesterol completely wrong
Saturated fat does not cause heart disease
Fat does not clog up our arteries
Fruit is fuelling the obesity epidemic
Sedentary behaviour did not cause this obesity epidemic...& exercise will not cure it

This website uses cookies to improve your experience. We'll assume you're ok with this, but you can opt-out if you wish.Accept Read More