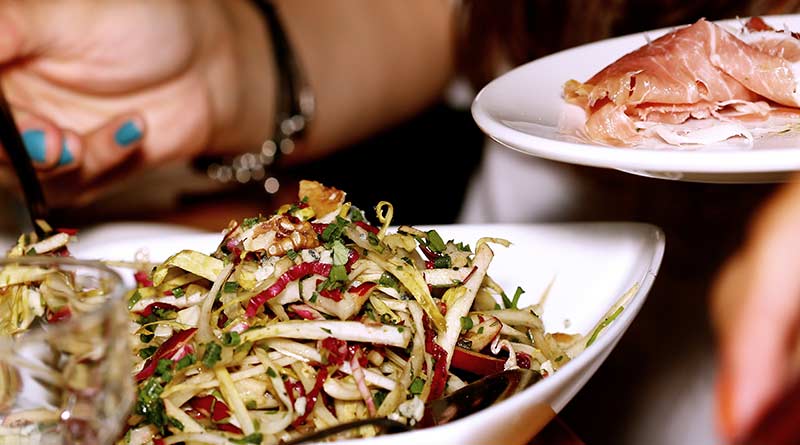 TV today is all about ratings and hash tags.

Horizon describes itself as “Horizon tells amazing science stories, unravels mysteries and reveals worlds you’ve never seen before”. Horizon has done some terrific programmes in the past. Tonight’s programme “Clean Eating – The Dirty Truth” was not one of them.

There was a lot of media coverage before the programme. The programme presenter, Dr Giles Yeo, popped up on everything from Radio 5 Live, to BBC breakfast, to Radio 4 Today’s programme, to Victoria Derbyshire… The main target, in the promotional activity before the programme, was what the Daily Mail called the “glossy apostles” of “clean eating”. The women featured, to generate interest in the programme, were Ella Mills (Deliciously Ella); The Hemsley Sisters (Melissa & Jasmine) and, someone I’ve not heard of, Natasha Corrett (“Honestly Healthy”).

As far as I’m aware, none of these women have ever used the term “Clean Eating”. In the Horizon programme, Ella Mills said of the term: “I haven’t used it, but as far as I understood it when I first read the term it meant natural, you know, kind of unprocessed.” The Hemsley Sisters clarified similarly, back in May 2016, that they think “real food” more appropriately describes their approach. Despite this fact, the programme kicked off with Yeo talking about these healthy looking women in ‘shocked tones’, as if somehow we too should be shocked by them. They cook from scratch and favour real food over processed food and they have the audacity to inspire others to do the same. In a world of growing obesity and type 2 diabetes, what’s the issue?!

Notice from the outset that no men were targeted. Despite the fact that James Duigan’s book is actually called “Clean & Lean” and Joe Wicks is encouraging people to get “Lean in 15”, Horizon only picked on the high priestesses, not priests. I wonder why?

There was a (bad) science story in the programme. Here’s a summary. A fake doctor, called Robert O Young, has been making money out of his co-called pH miracle Diet; the worst of his crimes being giving shocking (baking soda) ‘treatment’ and false hope to cancer sufferers. He was convicted (2016) of practising medicine without a license and is facing a three year sentence.

What has this got to do with Ella Mills? Absolutely nothing.

What has this got to do with The Hemsley Sisters? Absolutely nothing.

What has this got to do with Natasha Corrett? In one of Corrett’s books, she referenced Young’s views on acidity, alkalinity and plant based diets (the passages are quoted accurately in the BBC article here.  Corrett was given the chance by Horizon to completely distance herself from Young; she didn’t take it. That did not reflect well. (As a matter of interest, it turns out that Oprah also fell for the Young con and featured him on her show).

The programme went on to attack, quite rightly, The China Study. It did a fairly good critique, but the best dissection of this study was done by Denise Minger, somewhat ironically a former vegan/vegetarian. The China Study is a eulogy to plant-eating. It has become the vegan bible. It is far more likely to turn readers into vegans, or vegetarians at least. So, Horizon obviously cautioned about the dangers of giving up entire food groups?

Gluten describes (protein) component parts of some grains. Hence gluten is a sub set of one of nine food groups. Yeo told us in the programme “I’m going to investigate the messages that the new gurus of clean are selling us…. ‘Clean’ and diets like gluten-free are the latest fads…” He expressed horror at the number of people choosing to avoid gluten. How “extreme“!

So why attack those going gluten-free? Yeo has (unwittingly?) put himself in the middle of the cereals, bread and wheat (starchy carbohydrates) protection racket:

i) In July 2015, the Scientific Advisory Committee produced a report promoting starchy carbohydrate consumption (and pretty much clearing sugar, other than sugary drinks, of any crime). I detailed the fake food industry conflicts for the committee here.

iii) If you watched social media before and during the programme, you would have seen dieticians leading the attack on the women who don’t even use the term “Clean Eating.” Here are the conflicts for their Trade Union – the British Dietetic Association.  From infant formula to cereal partners, dieticians are friends of fake food – not the real food encouraged by the “glossy apostles”.

The Horizon programme expressed concern that there is no evidence base for encouraging real food (over processed food). There’s no evidence for our dietary guidelines: not RCT evidence; not epidemiological evidence; not then and not now. The best known nutritional slogan of all – five-a-day – has no evidence base. Not even the hydration message holds water. So, picking a fight in the evidence arena is not going to end well. I’ll take common sense (eat what the planet, not Ronald McDonald, provides) and 3.5 million years worth of evolution, thanks very much.

The Horizon programme wasn’t about Ella Mills or The Hemsley Sisters.  They haven’t and don’t use the term “Clean Eating.” These ‘pictures-of-health’ were, however, used by the programme as ‘link bait’ to generate pre-programme publicity and to attract viewers. When the programme presenter, Dr Giles Yeo, has 335 instagram followers, the Hemsley Sisters have 278,000 and Ella Mills has one million, why not harness the popularity of these real foodies to promote your so-called ‘science’ programme?

Who cares if the women’s hard-earned reputations are damaged by implication and association, because of the one con man that the show was really about?

TV today is all about ratings and hash tags. Shame on you Horizon.