Another irresponsible article, more misleading headlines – both the article and headlines ignorant about nutrition and the composition of food. There seem to be one of these a day at the moment and we independent bloggers have better things to do than correct ‘researchers’ who should know better. However, find the time we must because the health and weight of the population depends on us going back to eating what we evolved to eat – the meat, eggs and dairy products from grass living animals; fish from natural waters; vegetables, salads, nuts, seeds and local seasonal fruits – as found in our own natural environment. What we ate before we had an obesity epidemic.

Every time an article like this attacks real food, we take another step back from our return to eating what we should eat. Every time an article like this praises carbohydrates – the macro nutrient that has only been in our food chain, in any great quantity, for the blink of an eye in terms of evolution, we take another step towards staying with the appalling “base your meals on starchy foods” dietary advice that has made us fat and sick within three-four decades. This is why we need to spend our precious, unpaid time exposing the bad science in these articles…

Let’s start with the study facts: In 1991-92, 96,000 women, in the Uppsala healthcare region of Sweden, were randomly selected from four age groups: 30-34, 35-39, 40-44 and 45-49. They were invited to fill in a dietary and lifestyle questionnaire asking questions about: smoking; alcohol; exercise; activity; medical diagnosis of hypertension; height; weight and food consumption.

The article reports “women recorded their frequency and quantities of consumption of about 80 food items and beverages, focusing on the six month period before their enrollment in the study.” (I don’t know about you, but I can’t remember what I ate this time last week, let alone over the past six months)! You can tell that the participants also had poor recall of what they ate because Table 2 tells us that the mean calorie intake recorded was 1,560 – about three quarters of what would be expected.

49,261 Swedish women returned a questionnaire and these were whittled down to 43,396, excluding women for various reasons – “energy intake outside the extreme”, missing data and so on.

The results are presented on p3 of the article as: “Overall, the 43 396 women were followed up for an average of about 15.7 years and generated a total of 680 818 person years, with 1270 incident cardiovascular events (703 ischaemic heart disease, 294 ischaemic stroke, 70 haemorrhagic stroke, 121 subarachnoid haemorrhage, and 82 peripheral arterial disease).”

The first point to make – any overall risk is tiny!

Table 3 (p10) of the article gives the numbers of women diagnosed with total cardiovascular events and the breakdown for  ischaemic heart disease, ischaemic stroke, haemorrhagic stroke, subarachnoid haemorrhage and peripheral arterial disease by low carbohydrate-high protein (LCHP) score category. We’ll look at how useless this scoring system is next, but let’s just go with it for now…

Table 3 shows that the overall incident number for 43,396 women over 680,745 study years (women times average follow up period) was 1,270. Not deaths, please note, but medically diagnosed cardiovascular disease. This puts the overall incident rate for the study at 0.19%. This means that all the women in the study had a 99.81% chance of NOT suffering any cardiovascular events whatsoever during each year of the long study.

Table 3 claims that the 8,395 women with a LCHP score of ≥ 16 on their scoring system had a 0.23% incident rate during their 131,262 ‘woman years’. This terribly risky group, therefore, had a 99.77% chance of NOT suffering any cardiovascular events whatsoever during each year of the 15-16 year study.

The 8,343 women with a LCHP score of ≤ 6 on their scoring system had a 0.14% incident rate during their 130,965 ‘woman years’. This terribly NON risky group, therefore, had a 99.86% chance of NOT suffering any cardiovascular events whatsoever during each year of the long study.

The overall conclusion of the study in the abstract was: “Low carbohydrate-high protein diets, used on a regular basis and without consideration of the nature of carbohydrates or the source of proteins, are associated with increased risk of cardiovascular disease.”

I don’t know about you, but that minute differential is not going to keep me awake at night – despite being a woman in that age group eating a low carb diet!

Point 2 – the scoring system is absurd

“Imagine we have 10 individuals with protein consumption that puts each one of them into a different protein decile. So we score these individuals

Adding these together, these individuals have LCHP scores:

Or, as a member of The International Network of Cholesterol Skeptics , Bjorn Hammarskjold, put it:

And what would the ‘researcher’s try to conclude from this?!

There are three macro nutrients. We know them as carbohydrates, fat and protein. All food has at least one macro nutrient, most have two and some have three.

The only foods on this planet with no protein are sucrose (table sugar) and oils (sunflower oil,olive oil etc). Every other food contains protein (lettuce, apples, bread – everything). Sucrose is 100% carbohydrate – no fat or protein and oils are 100% fat – no carbohydrate or protein.

Nuts, seeds and whole milk are unusual foods in that they are high in all three macro nutrients – they have carbohydrate, fat and protein in good measure and are therefore not mainly a carb protein or a fat protein. I have no idea what these Swedish ‘researchers’ would make of these highly nutritious foods.

So protein is in everything other than sugar (nutritionally useless) and oils (nutritionally fairly useless – a couple of vitamins, no minerals). This article assumes that the higher the carbohydrate intake and the lower the protein intake, the lower risk of CVD the woman shall have. Hence our Swedish women should have eaten nothing but sucrose for 15.7 years and they would have had 100% carb intake and 0% protein intake (and 0% fat intake – presumably also marvellous). They would have had no vitamins or minerals, no protein, let alone complete protein and no fat, let alone essential fats. They would likely have died on a diet of nothing but sucrose years before the end of the study (does anyone know how quickly humans would die on sucrose alone?) but at least they wouldn’t have developed CVD! Seriously – the implications of this study really are this absurd.

Food is not just macro nutrients. There are micro nutrients that are also vital for life: 13 vitamins and approximately 16 minerals to be precise (there is more debate on minerals considered necessary for health, but the 13 vitamins – A,  eight B vitamins, C, D, E and K – are not debated). In the table below, we can see the macro and micro nutrient composition of two high carb foods (flour and sugar) and two zero carb foods (liver and sardines) – all data per 100g of product. The former two are the single most consumed ingredients in the British and American diets (that’s why we’re fat and sick). The latter two are two of the most nutritious food available on earth:

(Where macro nutrients don’t add to 100g, the remainder is largely water and then ash/minerals in small part)

This study would place the above foods in this order of CVD risk:

Use the nutritional facts to judge for yourself which you think are healthiest.

Table 1 of the study is actually interesting. Table 1 looks at “non-nutritional variables”.  Table 1 tells us the following:

The headline could have been “The older women get, the more incidence of cardiovascular events they experience.”

The headline could have been “The longer the time women have spent in education, the lower the incidence of cardiovascular events they experience.”

– HEIGHT: Here’s an interesting one. The shortest group of women in the study had nearly three times the incidence of cardiovascular events as women in the tallest group.

The headline could have been “Shorter women have more incidence of heart disease.” (Is this because the taller women ate more protein?!)

– SMOKING: Not surprisingly, smokers have nearly three times the incidence of cardiovascular events as non smokers. Giving up smoking helps but you’re better off not ever having smoked.

The headline could have been “Smokers experience more incidence of cardiovascular events.”

– EXERCISE: The lower the activity group, the greater the incidence of cardiovascular events.

The headline could have been “Less active women experience greater incidence of cardiovascular events.”

None of these headlines in this “And finally” would have had the global media impact of yet another pop at a low carb diet. Not only has the bad science given us a bad headline, it has missed giving us some other far more statistically significant information, with some very useful findings – albeit to corroborate things that we know anyway “smoking is bad”, “activity is good”. 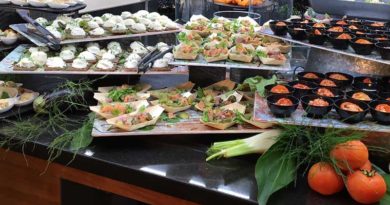 Food in the Canary Islands